Patrick Kudla: Off the Beaten Path 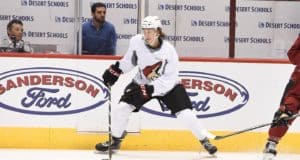 There seems to be a thousand different ways to make it to the NHL these days. We’ve seen players from far corners of the earth develop through some of the most obscure hockey leagues playing in desolate towns from Kenora, Ont. to Füssen, Germany. Somewhere amongst that dense entanglement of esoteric hockey leagues and secluded hockey towns is the University of Guelph. Six time champions of the OUA, and owner of two University Cup crowns, the Guelph Gryphons are among one of the OUA’s most historic programs, with roots leading back to their time as the Ontario Agricultural College. Over the decades, the Gryphons have seen their fair share of great players come and go, but only one has ever made the National Hockey League.

Ken Lockett was as good as goalies got in university hockey during his two seasons with Guelph between 1970 and 1972. Although those years only yielded moderate success for the Gryphons, Lockett would go on to join an elite list of university hockey goaltenders to play in the NHL when he joined the Vancouver Canucks in 1974. Lockett would back-up Gary Smith for a full two seasons before finishing his career with the San Diego Mariners of the WHA.

Enter Patrick Kudla. About 44 years after Lockett made his NHL debut, Kudla is the next best candidate to go where only one other Guelph Gryphon has gone before.

It was during the 2015-16 season that Kudla quickly began to gain notoriety among hockey fans and scouts. A native of Guelph, Ont., Kudla had just spent a season with the Guelph Hurricanes, and pieced together a dominant season with Oakville in the OJHL the following year. Kudla would later be drafted in the sixth round of the 2016 NHL Entry Draft that summer, taken 158th overall by the Arizona Coyotes. Now a bona-fide NHL prospect, Kudla committed to Arizona State Univ. (NCAA) and went south of the border to join the Dubuque Fighting Saint of the USHL for 2016-17. Yes somehow, here he is at the University of Guelph, a seemingly abrupt change in his career path.

“It happened very quickly and developed rather late in the summer”, says Gryphons head coach Shawn Camp of Kudla’s recruitment. “We had been in touch with him years before when he played with the Guelph Jr. B team, and we had contact with his older brothers about possibly coming to Guelph”.

As the summer of 2017 wore on, Kudla began to realize that maybe Arizona State University wouldn’t be the best place to develop his game and he began to look at other options.

“I looked at [Guelph] and saw they had a lot of returning players”, says Kudla. “But I saw they could probably still use a couple new defenders. So I think it fit perfectly with what I wanted and what [Guelph] needed.”

Playing time is always an attractive factor for any potential recruit, but the reality is Kulda would have gotten that with nearly any U SPORTS hockey program. But Guelph offered something nobody else could; the prospect of coming home.

“This gives him an opportunity to be reunited with his family”, says Camp. “His family went to the University of Guelph, so he’s the next in line to attend the university. He’s got a great reputation in the community as a player and a person, so he’ll be able to develop his ‘brand’ so to speak”.

Kudla added, “Being from Guelph we have the Storm and the Gryphons. So being a hockey family like mine, we didn’t just go to Storm games, we went to Gryphon games too. I’ve known of the OUA for awhile now.”

But even after joining a program he was well aware of in a league he was no stranger to, Kudla still admits there was an element of surprise for him in joining an OUA hockey program.

“Part of what attracted me [to the OUA] was the maturity of the players in it. But there was a commitment level that I wasn’t really expecting”, says Kudla. “There’s a lot of strength and speed. You need to be able to keep up with the pace, not only with your feet and your hands, but you need to think the game fast if you wanna play here because there’s some big boys out there that can think the game pretty fast, and if you can’t, they’ll catch you”.

So far, the Gryphons are off to a blazing start with an OUA West-leading record of 15-4-1 with eight games remaining. Of those games, Kudla has been limited to just 14 due to injuries, and has racked up a goal and nine assists. It’s nowhere close to the numbers he was gathering with Oakville, but it wouldn’t be the first time a top-end junior hockey recruit didn’t light up the scoresheet right away in the OUA. Stats aside, coach Camp sees more to the picture than just numbers when it comes to Kudla.

“His development has been fairly quick over the last few years and we expect his development will continue along that track with us”, says Camp. “He’s a very mobile defenceman, and he has real good vision of the ice. He makes good plays at high speed too, so he’s going to be a valuable asset for us anytime he’s in the lineup”.

Having been drafted by the Coyotes in 2016, Kudla finds himself in a unique position. He’s the only U SPORTS hockey player currently still property of an NHL organization, although that will expire soon if he doesn’t sign his entry-level contract in the near future. Having attended two Coyotes development camps, Arizona is well-aware of his progress and frequently have a scout at Guelph Gryphon games. But there’s still a long way to go for Kudla to realize his NHL dreams.

“I just want to keep getting better. I think it’s true when people say it’s not a sprint, it’s a marathon. I think it’s smart for me to allow myself to mature more and learn my position more so that I’ll be ready to jump in and make an impact right away rather than jumping in too quickly.”

If there’s anybody in the OUA that knows what it takes for Kudla to develop into his full potential, it’s Camp. Fresh off of his 17th season as development camp coach for the Ottawa Senators, Camp has worked with the top prospects in the Senators organization. He knows what it takes to get players to the NHL, and he sees the potential for U SPORTS to continue to grow as a developmental league for future pro hockey players.

“We’re seeing so many programs with great coaching [in U SPORTS] now that more and more players are making the jump directly to the AHL. It’s just a matter of time before someone jumps directly to the NHL”, says Camp. “The NHL is looking at U SPORTS hockey as a very viable development league. We’re seeing more guys go pro from U SPORTS hockey, and particularly in the ECHL and the AHL. Once they’re in the AHL, they’re one call-up away from getting into the show. We think we’re going the right way in terms of developing players for the NHL.”

U SPORTS is still light years away from rivalling the NCAA in terms of producing NHL players. But should Kulda find his way to the big leagues down the road the implications for U SPORTS hockey and its credibility would be huge. What exactly the future has in store for Kudla is uncertain, however, the short-term goal is clear. Through all the draft selections, development camps, and thoughts of a pro contract, Kudla and the rest of his Gryphon teammates are set to make a serious run at another OUA title.