In recent years, mental health awareness and the de-stigmatization of mental illness has been receiving more media attention. Canadian university athletes and sports teams have been vocal advocates for this increased awareness and support initiatives such as Bell Let’s Talk Day. 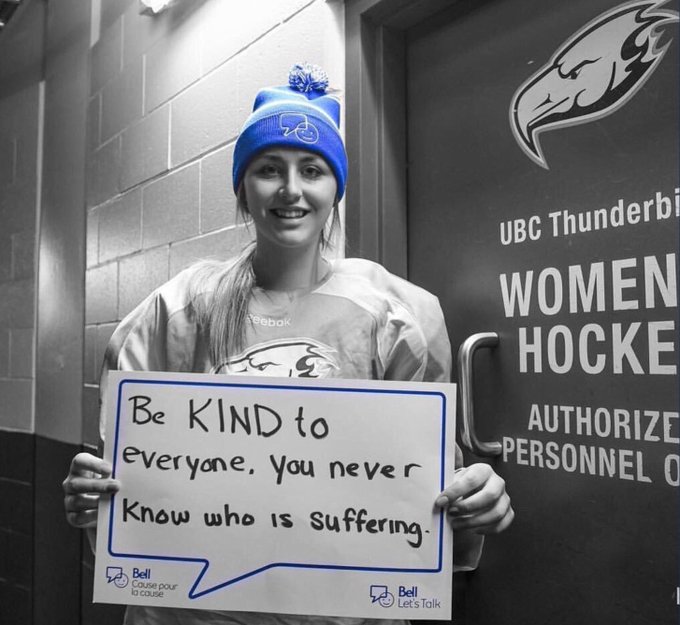 One kind word could change someone’s life. Ask someone how they are doing and be aware of what you say because you never know who is suffering #BellLetsTalk #OneTeamForMentalHealth #gobirdsgo

The University of British Columbia Thunderbirds hosted the University of Regina Cougars in the first of three games associated with raising awareness of mental health and reducing the stigma around mental illness.

The Thunderbirds and the Cougars met on January 12. The Thunderbirds invited those in attendance to wear green since green is the colour associated with supporting mental health. The Thunderbirds also put stickers in support of Laura Taylor, a Thunderbird alumna who lost her battle with depression, on their helmets. Finally, the game was tied to the launch of an online platform providing resources and information to UBC Varsity Athletes—UBC Athlete Hub.

In the second game, the University of Alberta Pandas hosted the University of Lethbridge Pronghorns. The January 26 game was one of several Canada West sporting events tied to the promotion of Bell Let’s Talk Day on Canada West Campuses. The Pandas and Pronghorns warmed up in blue Bell Let’s Talk toques, united in their desire to end stigma and promote conversation. There was also a booth of Bell Let’s Talk conversation tools — poster cards for messages, toques, thunder sticks, and a poster for messages of support and signatures.

The final game was between the University of Calgary Dinos and the Mount Royal Cougars. It was listed as part of the Canada West conference’s participation in Bell Let’s Talk activities. Coming as part of the Crowchild Classic weekend, most of the attention was on that aspect of the game and not efforts to raise mental health awareness. Undoubtedly, the game featured an acknowledgment of Bell Let’s Talk Day and the purpose, but it wasn’t the focus of the coverage of either team.

Sometimes, there are questions about the impact of having sporting events — particularly hockey games in this case — which acknowledge social issues like mental health. However, games like these are important for creating an inclusive and safe environment for the athletes on the ice and the fans in the stands. Though it might not seem like they do much, they can do a lot.

Illustrating that point is a deeply personal experience for me. For me, as a hockey fan living with mental illness, these games are more than just token efforts at inclusion. They’re moments of peace and of the understanding I am fine just the way I am. They are so profound, they make me want to cry.

Coping with mental illness, I hear a lot of comments — explicitly and implicitly — about when I’m going to get better or how I need to appear normal. And it takes a toll; constantly reinforcing the idea I’m not good enough as I am, or that there’s something wrong with me I could fix if I just tried harder to be well. The idea I need to hide a part of who I am or not talk about what I cope with because it’s shameful has been destructive to my self-esteem and sense of identity.

Games like these—games that say we believe that you’re okay just the way you are—are potent reminders that not everyone thinks there is something wrong with me. That there are people I admire who will value me just as I am. That when I walk into that arena and sit in my seat, I am safe to be myself, if it’s a good mental health day or a bad one. And that is worth more than I have words to tell you.

Games supporting mental health awareness affect individuals in different ways. They may be simply a nice gesture or a profound expression of acceptance. On a personal level, they are the latter. I cried when I found out the Pandas Hockey team was supporting mental health awareness because to feel accepted by a group of people you admire is a gift beyond compare. I cried again when I found out that their charity game would support the Alberta Mental Health Foundation.

Not just me personally, but people like me, who sometimes wake up without the strength to face the day, mattered to them. We were seen, we were worthy, and these people cared about us: another gift for which I don’t have the words to express the value. They cared enough to do something public when so many family and friends aren’t always willing to because they’re scared or ashamed or don’t understand.

For some, mental health awareness games might not mean anything, but for me, they mean the world. They symbolize acceptance and finding a safe place in the world – even if it’s just for two and a half hours at a time. And that is their real value.