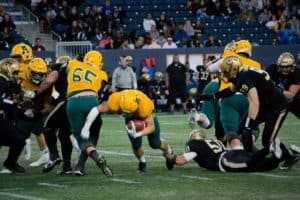 The 2017 Canada West football season was full of many tremendous performances. From fifth year Ed Ilnicki’s Hec Crighton recognition, to rookie debuts such as Regina’s Nick Cross, UBC’s Elliot Graham and Manitoba’s Shae Weekes, there was no shortage of excitement.

With 2017 now in the rear-view mirror, it’s time to take a preliminary look ahead to the 2018 campaign, and there’s so shortage of juicy storylines to pay attention to. Below is a breakdown of each team’s biggest priority this offseason.

The Dinos rolled through the conference yet again last year, thanks in large part to a dominant defence that registered 25 sacks, five fumble recoveries, nine interceptions and four touchdowns.

Seventeen of those 25 sacks came from the combination of defensive linemen Cory Robinson, Jack McEwen, Matthew Carson and Brett Wade. All four of these players have graduated, and Calgary will need to do their best to replace not only their production, but also veteran leadership.

Currently, there are just three other defensive linemen on the roster who got playing time during the 2017 season. Joel Van Pelt led the way with 15.5 tackles and two sacks, and will need to be even better in 2018. Entering his senior year, he’ll be the only lineman with more than three years of U SPORTS experience under his belt.

True freshman and 2016 CFC 100 prospect Jacob Plamondon saw action in six games last year, and has a good shot at nabbing one of the three other open spots for the Prehistorics. Calgary will hope to get similar production from fellow 2016 CFC 100 recruit Tyrese Best entering his second season with the team.

Eight of the Dinos 21 commits thus far are defensive lineman who will hope to contribute right away. Six-foot-six, 250 pound defensive end Cole Snyder will be one of the players to watch. He’s a local product who has the size and athleticism to succeed at the university level, and was also a top 100 prospect in 2017.

The Thunderbirds enjoyed another successful season last year under head coach Blake Nill, falling just short in the conference title game on a last second 59-yard miracle kick from Calgary’s Niko DiFonte. UBC wasn’t without their own struggles however – the biggest being injuries to their receiving corps.

The team lost impact playmakers Marcus Davis and Will Watson just two and three games into the season respectively, and the status of the former for his final year of eligibility is still up in the air. With the duo gone for the majority of the year, third year Trivel Pinto, a potential NFL prospect, was forced to carry the load. His 53 receptions and 717 receiving yards both nearly doubled the next player for UBC – that being versatile second year Trey Kellogg.

The T-Birds also lose two vertical threats, with six-foot-four Alex Morrison and six-foot-three Marshall Cook both graduating. Marcus Browne, a CFC 100 prospect from 2016, will be looked upon to fill the shoes of his predecessors. He played in all eight games as a true freshman, and along with Kellogg and third year J.J. Deslauriers, represent the future for UBC.

As of January 12, the team has recruited just two players, both of whom are defensive lineman. Don’t be surprised if the T-Birds bring in another 4-5 receivers, in order to create further competition.

The Rams were proficient offensively yet again in 2017, led by former Hec Crighton winner Noah Picton at quarterback. While their offence led them to victory on a handful of occasions, their defence lagged slightly behind, allowing over 450 yards per game and giving up 40 points or more on five separate occasions.

Part of the issue defensively for the Rams was a lack of pressure. Former rookie of the year and 2017 conference all-star Nicholas Dheilly accounted for 6.5 of the team’s 13 sacks, and only one other defensive lineman – third year Eric Wicijowski – was able to get to the quarterback, which happened just once. The Rams also lose veteran Bryce McKinnon, a valuable presence in the interior, and will need senior Grey McKen – who has played both defensive tackle and end – to step up.

The team recruited just four defensive linemen last year, and only have two commits signed thus far, which proves that they trust in the athletes they have on their roster. Matt Moore – who much like Dheilly and Wicijowski, is a product of Regina’s dominant Dr. Martin LeBoldus High School – has missed the better part of the past two years due to injury, but could be a big factor in 2018 in his third year of eligibility. Ajai Washington, a pure rush end who also missed last season, could also be a strong complement to Dheilly.

The Golden Bears were the talk of the town in 2017, clinching their first playoff birth since 2010 on the shoulders of 1,468 rushing yards from fifth year Ed Ilnicki. With the current Hec Crighton winner departing, Alberta is left with a question mark at the running back position for the first time in a number of years.

Only two other running backs saw carries last year, led by converted receiver Aundrey Webster, however his eligibility has run out as well. The team recruited just one back last season in Alex Gayle, but still have options such as untested sophomore Dryden Kelesnikoff, who played in seven games, as well as fourth year powerhouse back Tim Demidiuk.

Alberta also has two commits thus far who are running backs, including Trey Campbell, who’s torn up the British Columbia Football Conference (BCFC) the past two years with the Westshore Rebels.

The Bisons went toe-to-toe with nationally ranked Calgary and UBC last year, but were unable to finish either team off, which could be attributed in part to a young and inexperienced roster.

The Herd gave up a conference-worst 36 points per game last year, and had issues finding consistency within their linebacker corps. Fourth year captain Houston Rennie and fifth year linebacker James Mau were locks on the strong side and the middle, however Manitoba struggled to find a complement to the duo until the end of the season when rookie Brody Williams began to find a rhythm.

With Mau now graduated, Manitoba needs to find a man in the middle. There’s a possibility that Williams could switch into that spot, as well as senior Donovan Gregoire, but that’s still up in the air at this point. Kyle Gordon and Caleb Abraham both showed signs of potential as well, and have a few years left to develop, likely at the SAM spot.

Currently, the Bisons have recruited just one linebacker in six-foot, 215 pound local product Easton Montour. Look for Manitoba to potentially look to the BCFC for a few more prospects, something that head coach Brian Dobie has done in the past with much success. The Herd are also loaded on the defensive line, and there’s a possibility that a few of the talented members of that crew could be moved to best fit a positional need.

The Huskies got off to a hot start in 2017 under new head coach Scott Flory, winning their first two games before sinking back to reality and finishing 2-6. The Green Dogs defence was an issue, allowing 544 yards per game – 331 of which came through the air.

It’s a bit of a concern if your top five leading tacklers are all defensive backs, and that was the case for Saskatchewan last year. Compounding the issue is the fact that the team’s emotional leader, Brooks Falloon has now graduated, leaving duties to a group that, aside from junior Payton Hall, is mostly unproven.

The Huskies do have a few young stars that are hoping to build off of a trying year, including third years Brett Boechler and Bowan Lewis, as well as second year Nelson Lokombo. The group will aim to learn from last season’s tribulations, as well as help guide Flory’s first full crop of recruits, which includes two defensive backs as of January 12. 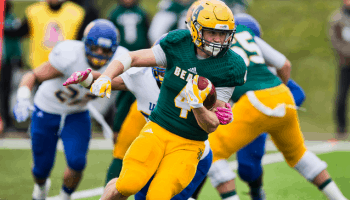