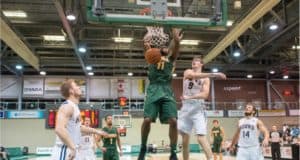 Brian Ofori (11) has made an impact on the U of R Cougars men's basketball team this season.

In conjunction with Martin Timmerman over at usportshoops.ca, CUSN’s poll voters consists of 13 media members scattered throughout the four conferences of differing ages and affiliations. The panel members are (with Twitter handles if applicable):

All four Canadian Conferences have now began play and our power rankings are now up and running. You’ll notice a difference from the U SPORTS Coaches Poll which is our goal, a look from a different perspective of the ten best basketball teams in Canada.

Carleton opened up their Conference schedule with a pair of convincing victories over Guelph and Algoma. The Ravens get their first road action of the year this weekend as they travel to Waterloo and Laurier

Up and down week for the Badgers with a convincing win at York and a tight one against the resurgent Gaels in Kingston. Big test for the Badgers on Wednesday with a road game against Ryerson before facing off with Toronto on Friday.

Two comfortable road wins from the Golden Bears in Winnipeg against the Wesmen last week. Bears looking great early on, excited for the clash with Alberta and Calgary early in 2018.

Two impact Canada West victories for the Dinos this week over the UBC Thunderbirds, Calgary now eyes an early January matchup with the Golden Bears. Dinos get the Wesmen at home Saturday and Sunday coming up.

AUS Basketball opened up with a bang as Dalhousie, led by Sven Stammberger put away St. FX in a pair of games. Tigers look like the best team in the AUS right now and  travels to Memorial for a pair of games Saturday and Sunday.

McGill along with most of the RSEQ open up their season this week, the win vs Ottawa should hold McGill steady in the standings for most of the year if they can continue to dominate RSEQ play like they have in years past. The Redmen get a matchup with Laval at home on Thursday in their first game of conference play.

For a team with so much roster turnover Ottawa looks very great opening up their season with a pair of wins over Algoma and Guelph. Gee-Gees travel to Laurier and Waterloo for games Friday and Saturday this week.

After a solid game which saw a few members of the injured rotation return on Friday in the victory over Windsor, Saturday was a different story as they dropped a tough one on the road to a sharp-shooting Western. Ryerson has looked uncomfortable in the rotations all year with a roster that has yet to gain full health. Big test for the Rams this week as they take on the #2 Badgers Wednesday night at Coca-Cola Court before welcoming McMaster’s Patrick Tatham back to Ryerson on Friday.

The good news: Conor Morgan returned for the Thunderbirds on Friday/Saturday.

The bad news: UBC still dropped two games to the Dinos this weekend.

They look to right the ship with two road games at UNBC this weekend.

Kadre Gray is the best player in Canada right now. The Voyageurs make the #10 spot in the Power Rankings this week after wins over Waterloo and Laurier including a triple-double from Gray. Voyageurs go on the road this week to face off with the Lakehead Thunderwolves on Friday.

Acadia Axemen – Scary season-opener for Acadia on Saturday as it came down to the buzzer against Memorial, they escape the weekend 2-0 and prepare to travel to St. FX for a Saturday matchup.